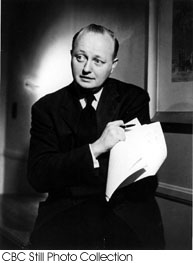 Andrew Allan came to radio drama with perfect timing to use his exceptional talents to drive the creation of a national radio theatre.

The Second World War changed everything, bringing a need to inform Canadians and turning the CBC into a nationalistic force. The change started with news which led into talk and patriotic drama series like Theatre of Freedom,Fighting Navy, and L for Lanky. That in turn led to an age of quality Canadian radio drama with its great benefit of affordable production. With Canadian families coast-to-coast listening to the same program, this proved to be as strong a unifying force as the railways had been.

Andrew Allan was at the centre.

He was born in Scotland, the son of a Presbyterian minister. He moved to Canada when he was 17 and attended the University of Toronto. There he found a fully equipped little theatre in the basement of Hart House and it was in that theatre he received his start in drama, along with others like Frank Shuster and Johnny Wayne.

His first radio experience was announcing a dance band on CFRB Toronto. He freelanced, writing plays for what was then the CRBC and produced plays at CFRB.

In the late 1930s he went to England to work in the theatre and produce radio plays. On the return trip, at the start of the Second World War, his ship was torpedoed. His father was killed when the propellor of a rescue ship sliced through a lifeboat. Andrew Allan and his fiancee, actress Judith Evelyn, were among six rescued from the 80 in the lifeboat.

He went to work as a producer for the CBC in Vancouver, known from 1939 to 1943 for some of the best Canadian radio drama and also the then home of notables like Allan Young, Bernie Braden, Lister Sinclair, John Drainie and Fletcher Markle. In 1943 he moved to Toronto to become CBC’s head of radio drama. That was at the start of the10 years that later became known as the Golden Age of Radio.

Andrew Allan created the Sunday Night Stage drama series that started with Stage 44 and moved through Stage 45, Stage 46 and on. The plays ranged from Shakespeare through original commissioned plays to political satire. He adapted plays and books and wrote original works, producing more than 400 radio plays during his career He was a master of radio technique and an autocrat on the set, dressed always in a formal suit and insisting on formal address while working. According to the mores of the time and the dictates of those above, he avoided naughty words even when they were part of Shakespeare’s original language. However, the series was a magnet for conservative criticism of what was in those days considered by some to be smut, indecency and blasphemy.

While producing for CBC Radio, he taught production at Lorne Greene’s Academy of Radio Arts.

Television brought an end to radio’s golden age. Andrew Allan hated television but it was taking radio’s audience, especially the audience for drama. In 1955 he attempted to make the change to the screen. His initial production succeeded, but he soon lost confidence. For a time he hosted Q For Quest (later just Quest) which started in 1961 and was intended to offer “a window on experimental and innovative performance and production.”

Later he returned to radio to write essays, first for Harry Boyle’s Wednesday Night, then for Bruno Gerussi, and finally for Peter Gzowski. In 1972 he was awarded an honorory doctorate by York University. ACTRA created an award in his name.

His autobiography, Andrew Allan: A Self-Portrait, was published in 1974. In the winter that year he suffered a stroke and died a few days later.