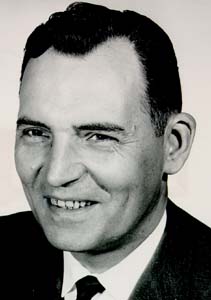 Cam Ritchie got into radio as a singer at CHML Hamilton in 1934 - a talent which led to announcing. In 1936, he joined the on-air staff at CKLW Windsor, Ontario. and following WW II, during which he was OC of the Canadian Forces Radio Services overseas, he was appointed operations manager for CKLW-Radio. When CKLW-TV went on the air in 1954, Cam was put in charge of operations for both radio and TV. In 1961, he was elected President of Western Ontario Broadcasting and General Manager of CKLW-AM-FM-TV, and a Director of the Canadian Association of Broadcasters. Cam served as President of the CAB for the term 1967-68.

In 1991, Campbell Ritchie was inducted posthumously into the CAB Broadcast Hall of Fame.