Christopher Plummer was the star attraction of this one-hour CTV drama series, and with Simon McCorkindale as his sidekick they held Counterstrike together for a tidy three-year run. Plummer played Alexander Addington, a very 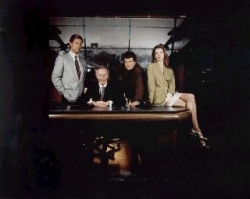 wealthy Canadian who hired a private group to free his kidnapped wife, and then funded an elite anti-terrorist strike force, in which ex-Scotland Yard cop Peter Sinclair (McCorkindale) played a key role.

Other cast members during the three-year run included Cyrielle Clair, Stephen Shellen, Sophie Michaud, James Purcell and Tom Kneebone. Counterstrike was a co-venture with Alliance Entertainment, the USA Network and French interests, and was produced in Toronto. It was in the Network's 1991-92 broadcast schedule on Saturdays at 9:00pm, and stayed in the same time period until it was cancelled in the fall of 1994.